A Peek at the Author

Through this media peephole let's look at Robert Brown Butler. Whether it is architecture, drawing, painting, photography, typography, or writing —this modern Renaissance man continually displays a level of artistry that a team of several different professional would envy. After receiving a degree in architecture from Cornell University, he careered as an architect and a builder; then in his forties he began writing books, each usually architectural in some way —until today he has authored fifteen literary works, five of which were thick technical books on architectural engineering for McGraw-Hill (one was 1070 pages long). In addition to writing his books' texts, he pens their ink drawings, designs their covers, formats their pages —even designs their typefaces. He writes in a wittily informative style that will make you feel the author is your best friend, one critic said "he is adept at simplifying the mysterious", and he has an eye for the theoretical that underlies the practical. Indeed he coined the expression, "Function is the nectar of æsthetics." He also is an excellent public speaker; as ocular proof, see him describe his Disaster Handbook, here, or Safe Shelters, here.

Children … Emily B. Sessa (Professor at University of Florida)

Public speaking … In California and Colorado in my 20s played in night clubs and local benefits, including concerts with Joan Baez and John Denver (though I didn't exactly have equal billing). For many years I have lectured on my architecture work, patented inventions, and writing at conferences, trade shows, civic organizations, and so forth. In 2009 I joined Toastmasters and in nine months I gave 55 speeches and earned their highest public speaking award: Advanced Communicator Gold. I have posted several video lectures of my literary works on YouTube.

Physical fitness … Since being on two state high school championship cross-country teams, I enjoyed competing in all kinds of road races and track events until an other-than-running injury sidelined me in 2012. Today I still do daily workouts at a health club and for my age I am in excellent health.

Genealogy … I have traced more than 3,000 of my American ancestors going back to earliest colonial America. In 1995, a 30 x 40 inch drawing of my family tree appeared in a national PBS television show on genealogy.

Artist … All my life I have been an artist. In my younger days my drawings, watercolors, and photographs were displayed in local art shows in Georgia, West Virginia, New York, California, and Colorado. Below is a sample of my artwork: a 13 x 20 inch poster titled Laws of Ecology which a few years ago I prepared for a local environmental event, in which I penned the text and painted the border. This poster could be published and sold nationwide, similar to the Desiderata poster that was nationally popular in the 1960s. 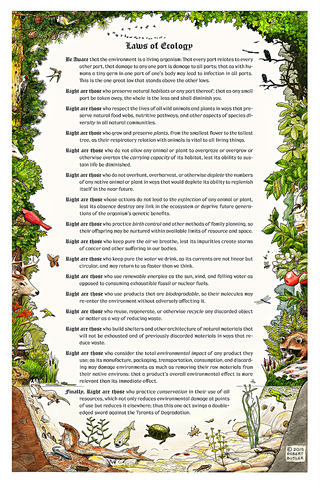